I’m Bob. I’m writing the story for Umbrella Mondays. But, I’m not going to talk about that, lest there be spoilers.

Instead, I’m going to talk about what I’ve done in my capacity as a language geek.

At first glance, these look like squiggles. They are. But, they’re also words! Specifically, they are the words nje’olu ojo kovenja, which roughly translates to “umbrella mondays” in the language spoken by fire spirits.

Now, some of you may look at those squiggles and say, “Cool! So, how do I read it? What’s the squiggle for A, B, and C?”

To which I would respond, “Well, there is no squiggle for A, B, or C”

“That’s a bunch of baloney,” you may say. “There’s clearly an A at the end of kovenja.”

And, you would be right about that last part, assuming you said those things. But, it’s not baloney! There no squiggle for A, B, C, or any of the letters of any alphabet because these squiggles don’t constitute an alphabet. Rather, they constitute a syllabary. A squiggly syllabary (say that five times fast).

A syllabary is sort of like an alphabet, but instead of each symbol representing its own sound, it represents an entire syllable. So, the last squiggle in the word kovenja isn’t a, but nja.

Here are the words nje’olu ojo kovenja again, this time with each syllable written next to it’s respective squiggle: 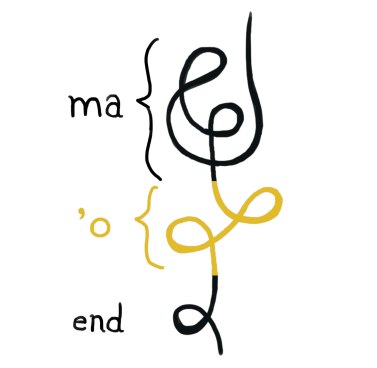 Now you may be wondering what the rest of the squiggles in the syllabary are. But, I’m not willing to give up all of my secrets quite yet, so I’m going to leave you with the following: